Nepal at a Glance 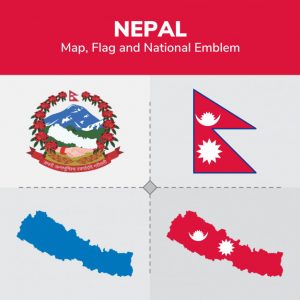 Nepal at a glance

Nepal officially the Federal Democratic Republic of Nepal is a landlocked country in South Asia. It is located mainly in the Himalayas but also includes parts of the Indo-Gangetic Plain.

As per the census survey of UN conducted in 2010, the population of Nepal is 27.8 million.

Nepal is a landlocked country, therefore, there is no direct access to Nepal through the water route. It lies in between two powerful nations India and China. China lies to the north while India lies to east, west, and south of Nepal. Nepal shares an open border with India. Nepal ’s geography varies as we move from flat plains in Terai to lush hills to towering mountains in the mountainous region. Amongst the highest peaks in the world, Nepal owns eight!

Nepal is a multicultural and multilingual nation. However, the national language of the country is Nepal. But as you travel to the different regions of Nepal, you will find a variety of language, culture, and lifestyle of people.

The climate of Nepal can be classified into four different types as:

September-November is considered an Autumn season

December-February is considered as Winter season

March-May is considered as Spring season

You will be a wide variation in Nepal when it comes to people and religion. However, people can be distinctly divided into two types Indo – Aryans, and Mangoloids (Kirat). Going through the history of Nepal, Nepal was a sole Hindu kingdom in the world before 2007 A.D. However, it was turned to a secular state since then. But the population of Hindu people is exceptionally high than that of other religion. Besides, Hinduism, the influence of Buddhism is also major. Considered as the birthplace of Buddha, the influence of Buddhism is high in the mountainous regions of Nepal. The influence of Christianity and Muslims can also be seen. People of different religion and culture live in harmony.

You can exchange your currency into Nepalese rupees at the counter in the airport. You can also exchange it through banks or other authorized foreign exchange counters in Nepal. For the reference of the exchange rate, you can visit the website of Nepal Rastra Bank, the central bank of Nepal.

If you want more information regarding Nepal, visit Wikipedia for more detail source.